Category Archives: Activities outside the park

Beyond the Park: part 2

Idjwi Island. A place few people know of and fewer still visit. Yet, at 340 sq km in size and 70 km in length, it is the second largest inland island in Africa and can be seen clearly from both the Rwandan and Congolese mainlands. Still, the island has remained neglected and significantly underdeveloped, with only a few car-free dirt roads criss-crossing the land and linking one tiny village to the next.

A documentary on Idjwi Island by Geo on French television channel Arte entitled “L’île oubliée d’Afrique (Africa’s Forgotten Island)” said “The inhabitants of Idjwi Island on Lake Kivu are poor but benefit from a a very precious good in this region of Africa: peace”. A trip to Idjwi is invariably relaxing, with friendly islanders totally unjaded by tourism greeting you wherever you go with warm smiles and no hassles. 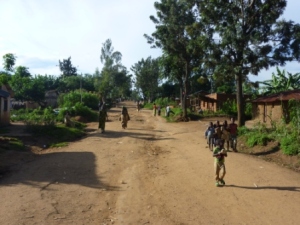 Activities include visiting one of the many pineapple plantations (and of course picking and eating one), village and nature walks, bird-watching, swimming in the lake and interacting with the local people to learn about life on Idjwi. Boat rides can also be organised, taking you around the small islets surrounding the island, where one of the main attractions must be Ishushu 1 and Ishushu 2. Ishushu 1 has a small and beautiful fisherman’s village, and the inhabitants take care of neighbouring Ishushu 2 in the owner’s absence. Pay the fishermen a small tip to guide you through the lush, primary tropical forest on this little piece of paradise, abounding in bird life and also home to a troupe of as yet unidentified monkeys. 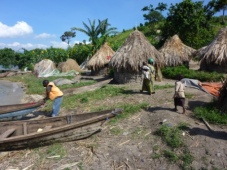 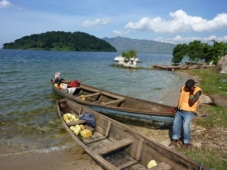 Posted in Activities outside the park, Idjwi Island

Beyond the park: Part 1

There is much more to our corner of DR Congo than the Kahuzi-Biega National Park, yet until recently many attractions had not been developed for visitors. The ICCN has over the last seven months been working with local communities, businesses and institutions to develop an array of visitor attractions both within and outside the park to realise the immense potential of this destination. Many are now ready for visits, and where better to start than Bukavu, the nearest city at an hour’s drive away.

Bukavu was established in 1901 by the Belgian colonial authorities and is the capital of South Kivu province. This picturesque city of about 250,000 boasts a pleasant subtropical climate and a scenic location between the southern shores of Lake Kivu and the forested mountains inland. The influences of Belgian colonial times can be found in the grand houses bordering the lake, the old cathedral Our Lady of Peace and in the magnificent Collège Alfajiri. This reputed academic institution’s establishment in 1937 heralded the beginning of mixed-race education in the Belgian Congo and yet its history is far from harmonious, being intricately tied in with the tumultuous history of eastern Congo itself. Its grounds were used as a base for a Belgian uprising against Mobutu in the 60s and as refugee camp following the 1994 genocide in Rwanda, and its walls are riddled with the bullet-holes from the subsequent invasion of Rwandan forces. The Collège Alfajiri thus serves as an important reminder of the past whilst at the same time, through its excellent academic programme, holding a key to the regions’s future, .

Just a forty minute drive from Bukavu, in the direction of the park, you can now for the first time visit the Royal Court of the Kingdom of Kabare. The Royal Kingdom of Kabare has a long and proud tradition as the most powerful kingdom of South Kivu and the erstwhile Mwami Kabare Rugemanizi “Zéro Zéro” was instrumental in the region’s resistance against colonisation and famously slapped a Belgian coloniser in the face. As punishment he was exiled 2,000km away, but brought back 20 years later when the Belgians finally realised that nothing could be achieved without his presence. To this day, the Royal Court retains its traditions and secrets, and visitors can spend time with the Mwami’s wise men who will present some of the objects of symbolic importance to the court, and to listen to the Griot sing the history of Kabare. Visits will finish with an enthusiastic Ntole dance performed by the Bushi villagers.

Bordering the park near the Tshivanga entrance lie the stunning high altitude cinchona and tea plantations of Mbayo. Visits typically start at the cinchona plantation (source of quinine) to learn about history of cinchona cultivation in DR Congo, including its collapse due to disease and its current slow recovery. Brave (or foolhardy) visitors may accept to chew on some of the cinchona bark.Visitors then move on to the tea plantation and factory to learn about the entire tea-growing process, « from the leaf to the cup ». Visits are rounded off most pleasantly with a cup of tea at a great viewpoint.

A snake in the herpetology lab

A forgotten jewel of our region is Lwiro, about 90 minutes north of Bukavu. This was once a favourite retreat of Belgian colonisers and even Mobutu. Aside from a magnificent landscape and being the entry point for the Tshibati waterfall walk, Lwiro hosts fascinating scientific research centres which have opened their doors for visitors. We spoke about the Centre de Rehabilitation des Primates de Lwiro (CRPL) in our last post, but right next door you find the Centre de Recherches en Sciences Naturelles (CRSN), a research center built by the Belgians in the 1950s, and the Centre Intégral d’Education de Lwiro (CIEL), which aims to educate visitors and local communities about the natural and anthropological history of the region. Visitors will be guided through the biodiversity hall, which includes the skeleton of Casimir, the first ever habituated gorilla, a botanical garden, an anthropological centre, the CRSN’s herpetology lab and the magnificent library.

A number of local tour operators can arrange visits/guided tours to all of the above mentioned attractions:

Visits to CIEL and the CRPL can be arranged directly by calling +243 810724524, and to the Mbayo plantations by calling +243 993 839 203, or talking to the reception of the Orchids Hotel.
This post has gone on too long, so we’ll save Idjwi Island and Lake Kivu for the next installment!

Posted in Activities outside the park, Tour operators